The Beethoven Fur Elise - probably the most well-known piano tune in the world. Play the opening to anyone and they'll recognize it...

This, along with the famous opening to Beethoven's 5th is the composer's most widely-identifiable impact on world culture. The snippets of the openings to both pieces have permeated humanity's minds so much that they're beyond famous.

So it's interesting that this piece wasn't even published during Beethoven's lifetime...

Click to read my popular article on Beethoven's 5th Symphony.

Beethoven sketched out the piece which became Fur Elise in 1810. He was 40 years old, a hugely famous and respected composer, who hadn't quite yet gone completely deaf. In short, he was at his peak.

But he didn't publish the piece he labelled a "bagatelle" (an inconsequential, small piece of music). He reworked it briefly in 1822 changing the accompaniment and adding more meat, but left it in his desk the rest of his life.

It was 4 decades later, in 1865, when the musicologist Ludwig Nohl stumbled over the Beethoven Fur Elise. He brought it in front of the world, and it's been loved the world over ever since. 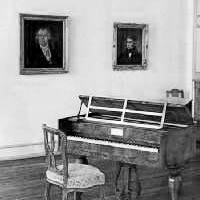 This is a point for argument. Almost everyone who knows the piece has wondered at some time or another who exactly Elise really is. The fact is that there's no definite answer...

Ludwig Nohl said he saw this dedication on the original manuscript paper (which is now lost). But there wasn't any Elise that we know of in Beethoven's life - not in letters, journals, or accounts of the composers friends. Mysterious indeed.

One theory is that Nohl couldn't properly read Beethoven's terrible handwriting, and that the dedication was actually Therese.

This matches up with what we know about Beethoven's life. The passionate composer fell in love with his student, Therese Malfatti, around 1810. He proposed marriage to her but she declined. He may have composed the piece in a fit of romantic anguish.

This theory was popular for a long time, but seems to be waning now.

Another possibility is that "Elise" simply meant "sweatheart" in Beethoven's day. So he may have actually written it "for Elise (Therese)". There's not much evidence for this idea though, and Beethoven didn't usually dedicate his pieces like this.

So both these theories seem to me to be false. In my opinion it doesn't really matter to whom the piece is dedicated - we should just enjoy the music!

The Beethoven Fur Elise is short and flighty. It starts out smoothly, with a sophisticated melody, but later becomes more agitated and seemingly random.

I can recommend the recording by Alfred Brendel, one of the finest and most intellectual pianists of the age. You can get it on Amazon:

For more pieces by Beethoven, check out the Beethoven music page!