Wilhelm Richard Wagner's epic, lavish music and innovative ideas about performance and art inspired generations of musicians and thinkers. This biography looks at his influence...

Despite his extreme legacy, he only composed a handful of works: 13 operas, and a small amount of other music during. Definitely quality, not quantity!

He has a reputation of being half-crazy and very intense. A lot of his later music is mind-explodingly monumental, and he radically reinvented several art forms, so it's no wonder really.

He also had an ego as big as his operas, and loved shaping his own public image. Genius or madman? Let's find out... 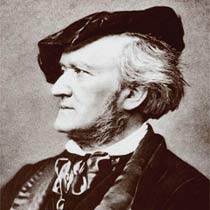 Richard Wagner was born in Leipzig, Germany, in 1813.

He was fascinated by theater and opera from a very young age. He loved how everything combined - acting, scenery, music, and costumes - to create imaginary worlds.

At first he thought of music as small aid, a way of helping drama. But soon he realized it had a bewitching power and importance all of its own.

When he first learned piano, he couldn't manage to play a proper scale, but loved to play theater overtures after hearing them! He tried learn composing on his own to add music to a play he had written.

He studied at Leipzig University, and then lived in Riga and Paris for a few years each. He conducted dozens of contemporary operas during these travels, which gave him a superb knowledge of the opera repertory at the time.

Later he had a small part in a nationalist revolution in Dresden, Germany. He had to escape the country, however, when Prussian forces thwarted the uprising and started flinging revolutionaries in jail. Exciting!

While Richard Wagner lived in exile, he got attracted to the philosophy of Arthur Schopenhauer, who has a ridiculously pessimistic view of everything.

Schopenhauer's writings had a massive influence on Wagner. They changed the way he thought about music, art, and life in general. The music and text of his later operas are packed with Schopenhauer's ideas.

Wagner kept on composing more operas, including the fairy-tale legend Lohengrin. He also wrote stacks of strongly-opinioned articles and pamphlets on things like art, religion, and politics. He began to become a minor celebrity because of his writings and operas.

"Mad" King Ludwig II of Bavaria eventually invited Wagner back to Germany. The young King, a die-hard Wagner fan, had just ascended the throne and was eager to help the struggling composer.

King Ludwig II paid off all of Wagner's debts and got the composer's new operas produced. Finally, after all of Wagner's misfortunes, something good was happening to him!

He was a great friend of Franz Liszt, although they drifted apart after Wagner had an affair with Liszt's married daughter.

Wagner was now settled, and close to completing his epic masterwork Der Ring des Nibelungen (the "Ring Cycle" for short). He wanted to create a special opera house just for performing the insane piece, which is basically four operas back-to-back.

King Ludwig II gave him a hand and Wagner eventually managed to build the Bayreuth Festspielhaus (Festival Theater) in Bayreuth, Germany. There's a big festival there every year, where they only play Wagner's music (the Bayreuth Festival)!

Wagner died in Venice on 13 February 1883. His body was brought through Venice in a black-shrouded gondola, and buried in Bayreuth. 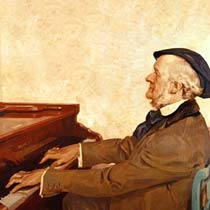 Richard Wagner's music and essays were heavily influenced by philosophy. This is part of the reason he's a complicated character, which people like to discuss a lot.

He wrote an essay called "The Artwork of the Future" when he was in exile. It describes his vision of Gesamtkunstwerk (German for "Total Artwork"), a grand fusion of all the different art forms.

Music, Song, Poetry, Dance, Visual Arts, and Drama would all be combined. Fascinatingly, he went through with his plans, and his late operas are actually excellent examples of "total artwork".

Wagner preferred to call his works music dramas instead of "operas", which describes more clearly how he saw his creations.

Wagner also had a vision of a theater in darkness, where the musicians would perform the opera but the audience had to imagine all the action in their minds.

Nowadays thanks to high quality recordings and headphones we can actually do what Wagner envisioned. Amazing!

Wagner was really enthusiastic about Schopenhauer's idea that music was the most important of all the arts (I agree with this). The composer-dramatist made the music the star attraction in his later operas because of this influence.

Richard Wagner wrote 13 operas (sorry, "music dramas"!) in total. He also wrote a handful of other small pieces, including the Siegfried Idyll.

Most of them are several hours long, with massive orchestras, extremely loud combinations of instruments, epic plots, and singing parts requiring superhuman stamina.

The incredible Ring Cycle is about 14-16 hours long (depending on the performance)!

His music sounded very new and loud to audiences. The press caricatured him a lot because of this, as you can see above...

Richard Wagner even invented his own instrument, the Wagner Tuba.

This is a brass instrument that has a sound halfway between the french horn and the trombone. Wagner invented it to get the right sound he wanted for the music dramas in his Ring Cycle. Talk about leaving a personal mark on music!

I personally love Richard Wagner's music. I think its complexity and drama is almost the perfect example of what music can become.

Here's a short rundown of more things that Wagner influenced...

His orchestral sound in general is beautifully full and rich. He also had an ability to create a seemingly infinite amount of colors.

I'd definitely count him as one of the greatest orchestrators in the history of music. Here's an example from the very end of "Twilight of the Gods".

(WARNING: turn your computer's volume down before you hit play, so you don't damage your ears):

This little passage is from the prelude of Tristan and Isolde:

Note how the lush harmonies which create a sense of yearning.

He'd thread these throughout his dramas, combine them to suggest a new idea, or alter them to create different moods. It's really a very clever way of telling a story.

Here's an example of a leitmotif from the Ring Cycle. This noble theme represents the gods' castle Valhalla.

For a great introduction to Wagner's epic music, I recommend this Best of Wagner CD from Naxos...

Learn about the Wagner Tuba, the composer's innovative custom instrument which defined a new sound for Wagner to illustrate his stories with.

A deeper look at Gotterdammerung, the lavish finale of the Ring Cycle.

Wagner's Siegfried Idyll, a charming piece for small orchestra created as a gift for the composer's wife.

Explore Tristan und Isolde, Wagner's landmark love story which defined his unique sound and distorted the boundaries of music as it was known.

A reader's wonderful story about his trip to the Bayreuth Festival.

A discussion with classical blogger Paul Pelkonen on Wagner's operas.

Quotes from Wagner, and a video documentary.