Wolfgang Amadeus Mozart was born in Salzburg (Austria) in 1756. The "Mozart Birth-House" is now a museum, and there's also a separate Mozart museum in Salzburg which is well worth visiting (I've been - you can see Mozart's actual pianos and original handwritten scores!).

Little Mozart's father Leopold was a professional musician, employed in an orchestra. He also dabbled in writing music, and also published a successful treatise on violin learning. But his achievements don't even begin to reach what his son would later do...

The first inkling that the Mozart family had of Wolfgang's ability was his gleeful stabs at simple note combinations on the clavier. The youngster was entranced by the sounds: they pleased him immensely.

Leopold began teaching Wolfgang clavier pieces when the boy was 4 years old. It started out as a simple bit of fun, but the youngster surprised everyone when he repeated pieces perfectly with astonishing musical refinement. 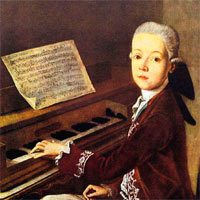 He also began composing little pieces, purely out of the desire to create music. Leopold was even more surprised at Wolfgang's ability to teach himself violin. The young master musician strained hard to advance beyond what his youth limited him to.

Leopold had a brainwave - market little Mozart as a child prodigy! So the entire family (sister Nannerl was an accomplished musician too) toured around Germany, France, and England. They performed for all sorts of people, and Mozart was exposed to new musicians and composers.

Life on the road was hard. There were no trains, so the family crossed vast distances in rickety horse-and-cart, and suffered from terrifying sicknesses. They often didn't get paid for a while either, so times were tight.

At the age of 17 (the year 1773) Mozart got a job as a court musician for the Prince-Archbishop of Salzburg. It was a great opportunity - he was being paid to compose in nearly every possible musical genre, letting him flourish as a composer.

He was throwing out symphonies and concertos furiously.

But the composer gradually grew bored and frustrated with the life and society in Salzburg, as well as the lack of opportunities for getting operas performed. He strived to find employment somewhere else.

In 1777 he left Salzburg, and went to Paris the next year, still looking for a new opportunity. It didn't go very well though: the Parisian musical world didn't seem to take much notice of him. In 1779 he ended up back in Salzburg. His father had gotten him a position as a court organist.

Mozart battled with his employer the Archbishop Colloredo, who was rude to him and treated the composer like a servant. The composer tried to quit but wasn't allowed. Finally he was relieved of duty, but humiliated at the same time.

Mozart was through with working for others. He decided to go it alone, and shifted his life to Vienna in 1881. From now on he would be a freelance musician and composer. So begins the most financially successful period of Mozart's life...

Mozart's new career started out well. Viennese musical society loved him, and he even played piano for the Emperor! After settling in for a few months he carved a reputation as the best keyboardist in all Vienna. 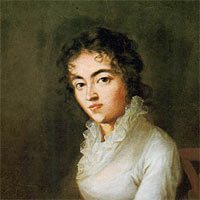 Another huge development took place around this time. In August 1782 Mozart married Constanze Weber, third daughter in a musical family. He had been courting her on and off for some time, but he finally got her!

Now Mozart was set: a new bride and a golden reputation, in the center of musical Europe!

Over the years that followed he set up concerts with himself as the star attraction. Piano concertos flooded out of him, and he added to his renown by performing in all sorts of unusual places (a restaurant and an apartment building, for instance)!

These concertos was super-popular (they're still performed today). But he also flourished in other musical genres, notably opera. His hit production "Die Entführung aus dem Serail" (The Abduction from the Seraglio) forged his name in lights as a first-class opera composer.

His financial situation became the best it ever was. He still had debts, but he had so much revenue coming in that he and his wife moved into a luxurious new apartment and began a relatively lavish life of spending. 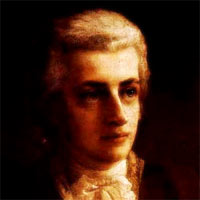 His fame peaked in 1785. The great composer Haydn told Leopold Mozart that Wolfgang Amadeus was 'the greatest composer known to me in person and by name'. What an honor!

The genius composer then moved away from writing keyboard pieces. In 1786 his first opera in 4 years was released. The Marriage of Figaro was a success in Vienna, and an even greater hit in Prague. It was his greatest and most popular work yet.

(Click to listen to and explore all of Mozart's operas...)

But it wasn't to last.

The world was changing - musicians were finding it hard to survive. Austria was at war. Mozart's main source of income, the nobility, was going through a money drought. They also didn't like the modern ideas in his newest operas.

Around 1786 Mozart performed less and less in public. His fame was vanishing. He started borrowing money heavily from friends. At the end of the next year he had to take a position as chamber musician for the Emperor to earn enough.

He continually struggled for the next few years, taking long trips to other European cities to try and spark his fame again and make some cash. But it never seemed to work out for him.

But in 1790 things began to look hopeful. Mozart started working furiously, turning out new piece after new piece. His financial situation improved, and his music from this era is some of his most beloved and famous. 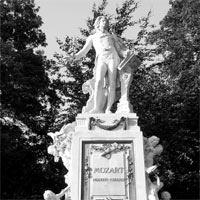 In 1791 Mozart was in Prague, at a premiere for his latest opera. But he got sick, and couldn't perform his musical duties. He was eventually confined to bed towards the end of the year, with aches and vomiting.

His wife nursed him on his deathbed. He was frantically trying to write his last piece, the famous Requiem. He had become convinced that he was writing his own funeral piece.

No one really knows exactly what he died of - in fact there are over 100 theories! But the most commonly accepted view is that the cause of death was rheumatic fever.

Mozart was quite a small man, gaunt and pale, who loved dressing up in nice clothes. His years of travel as a child make some think that he never matured, and was a sort of perpetual kid. The portrayal of Mozart in the excellent film Amadeus

He was a very hard worker, and would compose or sketch out music wherever he was: at dinner, waiting for a friend, etc.

It's strange, because he was probably one of the most talented musicians and composers of all time. But he could never find financial stability, even though it should have been easy for someone with his skills to become wealthy.

Was it his personality? Or merely the circumstances of the era? Personally I think it's a little of both. He was definitely an intelligent man and a musical genius, but never learned the knack of managing money and people well enough to create a stable life.

Like all geniuses, his immense powers came at the cost of other essential life skills. But let's be grateful that he left the world such a treasure chest of wonderful art.

All the Mozart Operas.

A look at the famous Mozart Clarinet Concerto.

Return from Mozart Biography and Life Story to homepage