The Mozart Coronation Mass is the master composer's most famous religious works, and a testament to his musical creativity...

Mozart had spent all of 1778 and a little bit of the start of 1779 searching for a good job posting in various cities in Europe. He wanted to find a position in a grand court, with a master noble and prominent enough to match Mozart's sublime musical talent.

But he couldn't find anything! In fact he only got offered one job, as an organist in Versailles. But Mozart thought it would be boring and not a suitable use of his talents.

His search had taken him to Mannheim and Paris (where, tragically, his mother died). In Mannheim he had to opportunity to conduct an orchestra so talented that he was shocked into disbelief.

He wrote to his father that they were like "an army of generals". He merely had to wave his baton and they would make magic. They could play anything he wished - not like back home in Salzburg! It inspired the way he composed everything else.

But despite this revelation, he was forced to make his way back to dreary old Salzburg. He strongly disliked the town - it was unimportant on the European map, and its ruler was despicable.

He had to take up the post of court organist (the very job he ran away from in Versailles), and his professional duties also required him to compose new music for the cathedral as often as he could.

But the Archbishop had some ridiculous rules for his sacred music. His idea was to make people focus on the church, not grand displays of musical magic. So the pieces he wanted had to be absurdly short, much shorter than what you could fit all the proper musical conventions of the day into.

We don't know the exact occasion for the Mozart Coronation Mass, but the situation ended up like this:

Mozart ended up in a city he hated, working for an Archbishop he hated, writing a seemingly impossibly compact Mass (the rules were: less than 45 minutes) which was supposed to fill a huge cathedral and create an atmosphere of grand joy. How did he do? 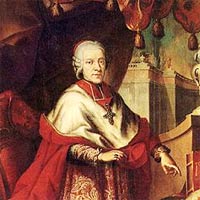 Fantastically! The end result was less than 30 minutes long, has numerous innovations, and is full of brilliance and positivity. He finished it in March 1779, and it was (probably) premiered that very Easter.

So why is it called the Coronation Mass? Like a lot of historical questions, the true answer is like to be lost through the murky passage of time.

The general myth is that the piece was used in the Coronation celebrations in Prague either in 1791 or 1792, conducted by Mozart's rival Antonio Salieri, and the name stuck.

This is debatable - I'm more inclined to think that the name originated in the early 19th century in the court at Vienna. 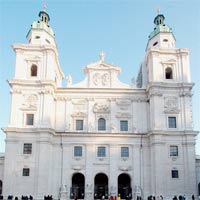 The Mozart Coronation Mass (K317) is a short setting, or a Missa Brevis. This could have been just another way of fitting in the tricky time limit.

The orchestra required by the Archbishop had to have a small army of loud, pompous instruments, despite the short length. This includes war trumpets and kettledrums. This kind of Mass also requires four solo singers. But how do you make each one shine while the clock is ticking down?

Mozart's answer was to combine the four soloists, creating a quartet of voices. It's like a miniature ensemble in the middle of a larger one - clever!

Here are the different sections of the Mass...

The Mass is very joyful and celebratory, with a quick rhythm and sparkling sound pallete. Just watch the Gloria...


Click to explore Mozart's operas, which feature more of his clean orchestral sound and uplifting passages (as well as the whole spectrum of emotions)...

The recording of the Mozart Coronation Mass I like the most is performed by the English Concert and Choir, conducted by Trevor Pinnock.

This recording just has more life in it than the others I listened to. The sound quality is also wonderful - clear and bright. The celebratory character of the Mass comes through brilliantly. One highlight many reviewers point out is the glorious voice of soprano Barbara Bonney, and I find it very hard to disagree!