Tristan and Isolde
The Languishing Opera and Famous Chord

Tristan Isolde is one of Wagner's most powerful operas. It's a full-blooded, passionate story with lush, raw music. People see it as near the pinnacle of opera, and Wagner's near-insane and distorted musical techniques glimpsed far into the future of music.

Personally I love the dark and anguished sound of the orchestra, which the opera is especially famous for. It's like Wagner managed to capture the essence of desire in music - heart-breaking! 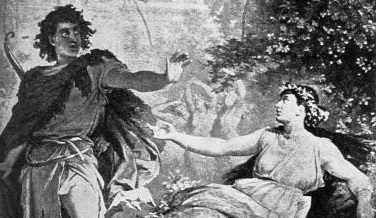 Wagner was actually in a rut when he started Tristan und Isolde. He was in debt, deeply bleak and depressed, and even thinking about suicide.

He started writing the text in 1854 (taking a break from writing the seemingly impossible-to-finish Ring Cycle), with the vague idea that it would be his final artistic achievement. Perhaps all this doom and gloom is what gives the opera its mournful sound??

His depressed mood was no doubt partly inspired by Arthur Schopenhauer's depressing philosophical books, which Wagner had started to read. The composer was fascinated by them, and used the ideas in the plot of Tristan and Isolde.

He wrote the score in Venice and Lucerne, all the time scared half to death of being taken in by German authorities for being a revolutionary. He finished it in 1859.

In Vienna in 1861 the first attempt to produce it failed. They rehearsed it over 70 times, but the orchestra couldn't get their heads around it. The lead tenor forgot half the words too!

It took another four years and the intervention of the Wagner fanatic kind Ludwig II to get Tristan und Isolde staged. The work was premiered in front of a huge audience, to explosive applause.

The opera uses sounds which the ear wants to finish or resolve, but Wagner doesn't give us the satisfaction, instead changing the chord to something completely different. He carries this on for the entire opera, representing the lover's yearning and passion.

Here's the the prelude to Act 3, which illustrates the chromaticism (using unrelated notes to give the music a "colored" sound) and aching emotions which the opera is famous for:

The Tristan Chord is a hugely famous and important chord from the opera, first heard in the opening prelude. It's famous for being so unusual and distinctive.

Music theorists have scratched their heads for more than a century trying to explain it. They can't decide on a name to give it or how to analyze it. Personally I don't think it's a chord, but more of a passing point between two other chords, or in music-speak a suspension (since the notes change after a while).

Because the opera is so dense and lush, I strongly recommend you learn the basics of getting good sound reproduction with a home stereo system before listening. It pays off...

Click to listen to and explore Gotterdammerung, Wagner's penultimate epic opera, even more languish that Tristan...

The plot takes place in the middle ages. Isolde is on a ship between Ireland and Cornwall, being taken as a bride for Tristan's uncle King Marke. Earlier Tristan had killed Isolde's fiance and then been nursed to health by Isolde, without her knowing what he had done.

Isolde finds this out from her maid Brangane on the ship, and becomes angry. She plans her revenge by ordering Brangane to mix a death potion. She invites Tristan to share a drink with her; they both drink, expecting to die, but in fact Brangane had mixed a love potion instead! The pair fall powerfully in love as the ship hits land.

Isolde and Tristan meet at night in King Marke's garden. Daybreak is near, which means they will be found out. But the lover just think that death will unite them eternally.

King Marke and his followers return. Marke despairs over Tristan's betrayal, and one of his followers attacks Tristan, wounding him gravely.

The scene changes to outside Tristan's castle in Brittany. Tristan is on the edge of death, being tended by his companion Kurwenal.

He grieves and waits for Isolde's ship. A shepherds pipe alerts him when it arrives. He maniacally tears off his bandages thinking she can heal him, but he quickly bleeds to death in her arms.

King Marke and his followers arrive, to pardon and forgive the lovers. Isolde doesn't hear though, and has a vision of Tristan beckoning her to another world. The opera ends with Isolde's "Love-death", a powerful aria where the heroin collapses on Tristan's body and dies.

The exact moment that Isolde dies, the musical tension of the whole opera is fully resolved. This is meant to illustrate the notion that the frustrations of love and life the pair felt have been calmed by their deaths.

My favorite recording of Tristan Isolde conducted by Karl Bohm at the 1966 Bayreuth Festival. The sound of the orchestra is lush and powerful, and Bohm portrays the frantic passion of the music excellently.

The recording features the warm tones and vibrant sound color of the Bayreuth Festspielhaus, as well the powerhouse duo of Birgit Nilsson and Wolfgang Windgassen in the lead roles. Great all round!

Here's a review of a contemporary production from the excellent blog The Gathering Note.

To me, Tristan Isolde proves that Wagner was dedicated to his art. He could have just written popular and light operas to please the masses. but instead he wrote innovative, intellecutal and complex works which caused outcry and hatred.

I'll leave you with the Isolde's Love-death aria from the end of the opera. This is an immensely beautiful recording sung by the peerless Kirsten Flagstad, conducted by Wilhelm Furtwaengler. Enjoy!!


Why not explore Wagner's other operas now?