Beethoven's Symphony no. 9 is a life-affirming masterpiece. The joyful message of the ninth has inspired millions of listeners over the world - it's an anthem for humanity.

It's hugely important in music history and world culture. It was one of the last pieces the composer wrote, and is one of his most famous. Personally I love it!!

History of the Beethoven Symphony 9 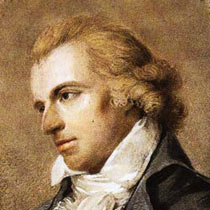 The poem Beethoven used for the final movement is an excessively cheerful drinking song written by the famous poet Freidrich Schiller in 1785.

The joyful lyrics talk about uniting all people in universal brotherhood. Beethoven's little introduction to the poem also mentions not dwelling on sad things, but being happy instead.

The Ninth Symphony is a sort of patchwork of different times from Beethoven's life.

He originally had the idea to set Schiller's poem when he was in his early 20s. He then worked on the music later, during the late 1810s and the early 1820s.

Originally he didn't plan to have a choral finale. But eventually his earlier idea of setting the poem merged with the symphony he was writing, and he added voices to the fourth movement.

He struggled a bit at first with this idea, since he thought it was bizarre to suddenly have a chorus introduced after so much silence!

His clever solution was to introduce it gradually, beginning with a solo baritone singer, leading up to the whole chorus entering in an exciting burst of energy. This still sounds amazing nowadays, but imagine what it must have sounded like when it was first performed!

The Beethoven Symphony 9 premiered in May 1824, with Beethoven conducting. It was a huge event, the first time the musical master had performed in public for years.

However, since he was completely deaf by this time, Beethoven couldn't actually hear the symphony he was supposed to be conducting!

In fact, the real conductor sat out of sight at the side, secretly keeping time for the musicians.

When the performance ended, the audience erupted in celebration. Beethoven was still concentrating on conducting though, since he was a few bars behind the real performance.

One of the singers had to gently turn him around to see the ecstatic audience, whose cheering he couldn't hear. He left the hall with tears in his eyes, powerfully moved.

Read about other milestones in Beethoven's life here

The composer wrote the symphony for large orchestra, choir, and four solo singers. Beethoven also swapped around bits of the traditional symphony structure, by placing the scherzo movement second, when it's usually third.

The mysterious opening mimics the sound of an orchestra tuning up. This suggests to me that the entire symphony is being born out of a musical nothingness. The music then erupts into a frightening theme, which the whole stormy movement is based around.

The first movement is in the traditional sonata form, which means that Beethoven plays around with develops this main theme a bit before repeating it much later on.

The second movement is a whirling scherzo, full of energetic drama. The middle trio section is softer and calmer, until the scherzo re-enters in full force, crushing any less exciting sounds. This is my favorite movement!

This is a slow and thoughtful movement. It's typical of Beethoven's introspective late period, and it contains graceful melodies and a very sweet orchestral sound. It's almost like a rest, a moment of calm, from the vicious fury of the previous two movements.

The famous final movement is actually a small 20 minute symphony in itself. Broken down, you can see that it has four miniature movements, which mirror the larger movements of the symphony itself.

This little symphony-in-a-symphony opens with a crashing shriek, followed by little snippets of melodies from the other movements. One by one they get cut off by the bass strings for some reason (no good? not joyful enough?), until they're all dismissed.

Now there's nothing left but for the basses to invent their own material: the famous Ode to Joy theme. The choir repeats it gloriously, and then the music then goes through several variations of this majestic melody.

The Beethoven symphony 9 ends in a wonderful storm of joy, with the choir soaring and the orchestra celebrating humanity.

Click to read about Beethoven's other famous pieces here

One of my favorite recordings is Herbert von Karajan conducting the Berlin Philharmonic, from 1962 (he did a few other recordings of this piece as well).

This particular interpretation has a magical fiery tone and is extremely forceful, especially in the first and second movements. This is exactly what the music deserves!

I can also recommend the 1987 recording by Georg Solti, with the Chicago Symphony Orchestra & Chorus. Solti manages to render every strand of music in the piece clear and pulsing, and although he is a little liberal with the tempo markings, especially towards the end, the entire performance is brilliantly balanced and spectacularly vivacious.

Also renowned is the "Ode to Freedom" performance by Leonard Bernstein in Berlin, with the New York Philharmonic and mixed choruses. Although the ageing Bernstein performed the piece at a slower-than-average pace, which earned the scorn of some listeners, the recording still has a sense of glowing beauty, especially in the more majestic passages.

Be warned though, the recording suffers from some slight errors; get this as a second or third version, not your primary 9th.


There is a great simple guide of the fourth movement, with time markings and the poem in the original and translation.

Also have a look at an interesting short article on Beethoven's Symphonies (amongst other things!) at classicaltv.com.

You might now want to look at my overviews of other Beethoven symphonies: