Using nothing but sound, Liszt paints detailed pictures of the three characters' emotions, psychology, and personalities.

I think the entire piece (it's over an hour long!) is an excellent showcase of Liszt's astounding talent.

The composer Hector Berlioz introduced Liszt to Goethe's devil drama Faust in 1830. Liszt toyed with the idea of writing a work based on it for two decades.

It wasn't until he moved to Weimar, where Goethe was buried, that he began to seriously compose his Faust Symphony.

He got really passionate about it, and finished writing the whole piece in two months.

The Faust Symphony was premiered in Weimar in 1857, to celebrate the opening of a monument to Goethe.

Goethe's Faust is an epic closet drama. It's based on a medieval German legend about the sorcerer Doktor Faustus, who people thought had made a deal with the devil.

The basic story in Goethe's version of the legend is that the devil Mephistopheles makes a bet with God that he can't tempt Faust (whom God says is a model human) with worldly desires.

Mephistopheles goes to earth, and eventually manages to trick Faust by using his desire for the beautiful maiden Gretchen against him. 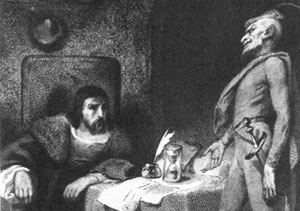 Liszt wanted to illustrate in music the essence of three main characters from Faust. Because of this I'd say the piece is a perfect example of program music (music that describes an idea or story).

Liszt chose to dedicate a movement to explore each character. The movements are:

The music is typical Liszt: fast-paced, lush and opulent harmonies, and melodies and themes which transform according to the story.

It's also notable, since it uses very advanced (for the time) harmonies, which were modern and progressive or the middle of the 19th Century.

The first movement starts with searching music depicting Faust, a philosopher and academic. He's studied all the possible worldly disciplines, but is frustrated that he can't find ultimate knowledge.

The music then goes through several melodies, each one representing things like "passion", "love", and "longing", depicting Faust's suffering and inner turmoil.

The themes are really effective at illustrating moods. Here's the "love" theme, for example:

Eventually we get to a big triumphant theme, which represents Faust's pride and depicts him as a hero. This is one of my favorite themes in the whole piece!

In the second movement Liszt uses some of his most tender music to illustrate the innocence and gentleness of Gretchen.

We also hear the "love" theme in different versions. First is a passionate outburst:

Later on we hear a rapturous, almost spiritual version, which represents the love Gretchen feels for Faust:

In the final movement Liszt's trademark devilish music is a perfect representation of the cheating Mephistopheles.

The music in the 3rd movement is interesting. According to Goethe, the devil can't create anything, only destroy.

So Liszt doesn't give the devil any original themes. He just takes Faust's themes and mutilates them into gleefully wicked parodies to show Mephistopheles acting through Faust. What a clever way of getting round a tricky problem!

An here's the distorted pride theme:

We also hear the Gretchen theme briefly, unchanged, which shows that Gretchen can't be influenced by the devil.

At the end, Mephistopheles loses the wager with God. Faust's soul is transported up to heaven.

The movement (and the whole Faust Symphony) ends with a majestic chorus for male choir and a tenor soloist, nicknamed the "mystic chorus".

One recording I can recommend is Leonard Bernstein conducting the Boston Symphony Orchestra. It's a little on the slow side, but because of this you can hear the combinations of instruments better (especially that heavy brass!).

Liszt wasn't that great of an orchestrator (since most of his pieces are for piano). But since listening to Berstein's measured interpretation I can appreciate the composer's instrumental writing a lot more. 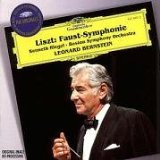 But I think my favorite recording is Kurt Masur conducting the Gewandhaus-Orchester Leipzig.

There's a lot of energy in their performance, and I think they manage to capture the mystical element of the Faust Symphony very well. This recording is actually part of a box set which includes all of Liszt's other orchestral works - highly recommended! 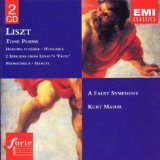