Just how did Beethoven die? This question has confused music lovers and scientists alike for almost 200 years.

There have been all sorts of theories like alcohol poisoning, lead poisoning, syphilis, and hepatitis. But no-one is ever completely certain.

Ludwig van Beethoven died on March 26, 1827 in Vienna, during a heavy thunderstorm. He was 57. The official cause of death was liver failure.

What is true is that he had been sick on and off for years during his late life. In December 1826 he had a particularly strong wave of sickness, and had to stay in bed. As his last health vanished he and his friends knew that he would soon die.

Beethoven had been so horrified at the effects of his mortal illness (bad breath, stomach swellings), that he actually requested that doctors did an autopsy on him to figure out what happened.

This was to make sure no-one else suffered like he did.

Doctors performed the autopsy the day after he died. It turned out his liver was a shrunken mess after years of damage. This could have been from heavy drinking, or perhaps some kind of lead poisoning.

The lead poisoning theory actually has some fairly strong evidence behind it. Recently scientists examined Beethoven's remains and found that he had waaaaaay too much of the toxic metal in his system - 60 times too much, in fact.

He also suffered from stomach problems during his last years alive, which is another symptom of lead poisoning.

Anyway, based on these findings I'd say it's almost certain that he had some kind of mild lead poisoning for several years, although not enough to kill him straight out.

This lead poisoning could have come from loads of different places - drinking from lead cups, taking lead-laced water at a spa, etc. etc....

But what may have pushed the lead overdose over the brink was his doctor's treatments!

The reputable Herr Doktor Wawruch tried to stop Beethoven suffering from his stomach swelling by puncturing the composers abdomen several times to let excess fluid out.

Each time he did this, Dr Wawruch covered up the wound with a healing cream, which happened to be full of lead. These repeated shotgun blasts of lead could have killed the poor composer.

The evidence for this seems strong. Based on hair samples, it's possible to see that the amount of lead inside Beethoven shot up every time he was treated. It happened four times in total.

So it's possible that Beethoven's doctor didn't know about his ridiculously dangerous lead levels, and had no idea that his cream was going to finish the composer off.

We're slightly closer to answering the question 'how did Beethoven die', but every theory has arguments against it. We may never find out the real answer (personally I put it down to the general unhealthiness of people in Beethoven's time).

Now you've seen how the great composer died, why not see how he lived and what he created in the Beethoven biography and Beethoven music sections? 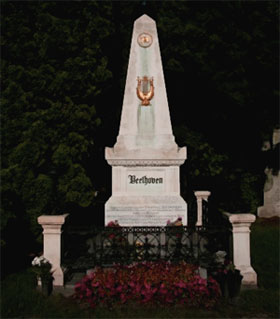