The Liebestraume (catalog number S541), and especially the third one, have become amazingly popular over the years. They're some of the best examples of Liszt's ability to blend beautiful Romantic melodies and moods with complicated technical piano challenges.

Liszt published the three Liebstraume in 1850, when he was in Weimar. They were solo piano transcriptions of songs he had written for high voice and piano several years before.

The songs used lyrics from poems by Ludwig Uhland and Ferdinand Freiligrath. 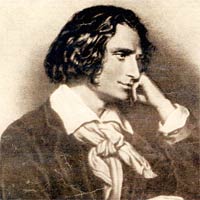 
The pieces have a calm nocturne-like feel, full of rich harmonies and magical piano flourishes. Here's a video of the second Liebestraum...

Liszt was a contemporary and friend of opera legend Richard Wagner, whose music is similarly impassioned and sensual.

There are, of course, dozens of recordings available of the Liebestraume (especially no 3). Here are my choices...

Jorge Bolet's recording of the 3rd Liebestraum captures the warm, romantic mood, even if it is played slightly slowly. The best way to get this is the bargain double CD from Decca (featuring other popular Liszt pieces).

For a set of all three of the pieces, I suggest Jeno Jando's 10th volume of Liszt's piano music on Naxos. Jando plays a bit to quickly and stiffly for my tastes here, but technically he's brilliant.

And the third recording of the pieces I'd recommend is by piano god Leslie Howard, who recorded them as part of his monumental Liszt cycle. Howard has a tendency to play too fast sometimes (as if he's hurrying on to record the next piece...) but in terms of sheer skill this is probably the most impressive.

If you're looking for the original song version of the 3rd piece, I highly recommend the recording by tenor Dennis O'Neill with Adrian Farmer accompanying on piano.

O'Neill's soaring, perfectly-controlled voice captures the potent emotions of the lyrics, and Adrian Farmer's playing is wonderfully evocative. The only criticism I can really think of is that sometimes O'Neill's singing is too much in the "Italian opera" style for this very reflective German song. But it doesn't detract from the music-making. 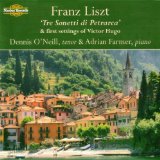