At first a four-hand piano suite, Maurice Ravel's orchestral ballet version made it well-known and popular.

Although it's whimsical, the music also has a hint of sadness throughout, which I think hints at Ravel's attachment to childhood.

I really like the cozy feeling of the suite. It's full of the warmth of childhood fantasies, and of course has Ravel's twin signatures of a luxurious sound and elegance.

Ravel first wrote the Mother Goose Suite in 1908 for two children whose parents he was friends with, in a four-hand suite for solo piano.

The children, Mimi and Jean Godebski, were extremely fond of him since he told them fairytales, some of which he made up on the spot! 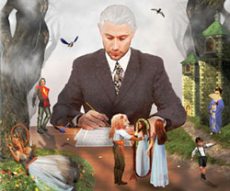 The original five movements of the suite each illustrate fairytales, most of them written by French authors...

Three years later arranged it for orchestra, and then in 1912 he went even further and transformed it into a ballet.

Ravel fleshed out the music for the ballet version, adding in a prelude, a final section, swapping the movements around a bit, and putting in little interludes to connect everything.

Since Ravel's sense of sound was so fine and precise, the orchestral versions don't sound like boring rehashes of the piano music.

To me they're like re-imaginations of the piano music, inspired by original but with a magical flourish of orchestral color.

Ravel's orchestration of the Mother Goose suite actually more depth to the pieces.

For instance in the "Beauty and the Beast" movement we get an idea of Beauty's perfect princess character through the low flute and floating strings.

After this "once-upon-a-time" theme starts off the ballet, we gradually hear distant horn sounds and other orchestral images.

Each time the little motif appears between the separate movements, it's like we're hearing Ravel say to the children "which story would you like to hear?". This is a great touch!

In the finale, this little theme returns triumphantly to celebrate the storyteller's art and the happy ending of this musical storybook...

Ravel's music here is, like usual, injected with a lushness and refinement which makes it sound slightly jazz-like.

Fittingly, the orchestrated version has no heavy brass intruments (bye bye tubas and trombones!), to keep the music sounding light and imaginative.

But Ravel sort of makes up for the brass instruments, and gives his sound pallete a story-like twinkle by including a small army of percussion instruments, including my favorites the gong and the glockenspiel.

Because the suite is so full and rich, I strongly recommend you learn the basics of getting good sound reproduction with a home stereo system before listening.

I can recommend two recordings of the Ravel Mother Goose Suite.

The first is by Pierre Boulez conducting the Berliner Philharmoniker on the Deutsche Grammophon label. This is a wonderful performance which does everything the right way.

The other recording, which I think brings out the childlike mood of the suite fantastically, is by Stanislaw Skrowaczdwski conducting the Minnesota Orchestra.

I'll end with my favorite movement (Laideronette), and finale of the Ravel Mother Goose suite itself, the magnificent Fairy Garden.

We're lucky to have this great video of a beautifully colorful interpretation of BOTH of these pieces on the one video. You can't see the orchestra actually performing, but this is hands down the best-performed version I've found online.

Listen to the exotic and tinkling images in Laideronette, and try not to be too moved by Ravel's expression of the lost innocence of childhood in The Fairy Garden (which starts at around 4:52 in the video)...

Here's a free recording of the suite you can download, by the Columbia University Orchestra. Be warned though, it's not the complete ballet suite, and the playing is relatively amateur-sounding in my opinion!