The Tchaikovsky Sleeping Beauty Ballet is a near-perfect classic, a captivating fantasy story filled with magic and poetry.

The composer himself loved the project, and was extremely proud of his music. The charming fairy tale is seen as the height of classical ballet, one of the greatest, purest works in the art form.

It also holds a special place in the hearts of loads of great ballet dancers, since it inspired a lot of them to first start pirouetting and leaping around.

In 1888 the director of the Imperial Theater in Moscow told Tchaikovsky he was going to write a new ballet plot, and asked the famous composer to write the music.

The story was based on the Grimm Brothers' version of imaginative Frenchman Charles Perrault's 18th century tale "The Sleeping Beauty". Tchaikovsky loved the story when he read it, and became super-enthusiastic about the ballet.

It was his second ballet, and he composed in a whirl of intensity, loving every second of it.

Tchaikovsky ended up writing the ballet in ultra-record time, even with constant interruptions from having to travel.

He blazed out a sketch for the entire three hours of music in roughly 40 days (according to his own estimation). Whoa!

Learning from the hilarious disaster that was Swan Lake, Tchaikovsky worked really closely with legendary choreographer Marius Petipa to get everything perfect.

The premiere of the Tchaikovsky Sleeping Beauty ballet was in St Petersburg in January 1890. It was a smash-hit, loved by audiences and critics (even if the Tsar's praise was not that keen!). At the 50th performance the dancers gave Tchaikovsky a crown on stage.

Now it's a ballet favorite, performed all over the world even to this day!

The Music and Dancing 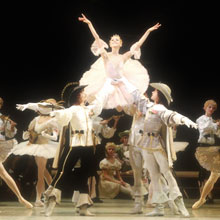 Sleeping beauty is Tchaikovsky's second ballet. He injected it with the same sweeping symphonic drama, great melodies, and warm sweetness as his first ballet Swan Lake. Personally, I think it's the Tchaikovsky ballet with the most amount of enjoyable melodies!

It's very finely composed, not too romantic or sloshy, and with just the right amount of fairy tale colors. Tchaikovsky also attached musical themes to different characters, then blended and played with these to create a story-telling tapestry of sound.

A lot of aspects, such as the choreography, of the first production are still around today. Although at four hours long (including the intermission!), some ballet directors like to cut bits out.


Here's a condensed version of the plot of the Tchaikovsky Sleeping Beauty Ballet...

It starts with the celebration of Princess Aurora's christening. But the King made a social faux-pas, forgetting to invite the evil fairy Carabosse.

She turns up anyway, fuming, and puts a curse on Aurora. When she turns 16, the Princess will prick her finger and die. But the good Lilac Fairy comes to the rescue, and reduces the curse to 100 years of sleep. Not bad!

On her 16th birthday Aurora accidentally pricks her finger. A short century later, the dashing Prince Florimund stumbles on the old castle where Aurora slumbers.

He kisses her, breaking the spell. In the grand wedding scene, everyone dances and celebrates, and other fairy tale characters from different stories also take part. The End.

This final Act is so huge that it's sometimes just performed on its own!

Two of the important melodies in the Tchaikovsky Sleeping Beauty ballet represent the two fairies:

Carabosse's theme is evil and bleak:

The Lilac Fairy's theme is gentle and pretty:

Other ballets by Tchaikovsky: The Nutcracker Ballet, Swan Lake

A great DVD version is the Royal Ballet performance from 2006, released by the BBC. It has excellent quality video, and some interesting extras. I'm also very fond of the costume and stage design here: they perfectly fit the music!

The dancers themselves are also all of extremely high calibre (even acclaimed principal dancers perform as supporting characters in this production!) Here's a clip:


If you just want the music, then I can suggest the 1988 remastered recording by George Weldon conducting the Philharmonia Orchestra of London.

It's a confident, strong performance. But I found the sound quality slightly odd - it lacks some bass, and has a slightly glassy sound (in my opinion). The recording is also an abridged version of the ballet, with some cuts.

An even better recording comes in a box set of all three Tchaikovsky ballets (on the Decca label), conducted by Richard Bonynge with the all-star National Philharmonic Orchestra.

This recording is uncut, so you get every single note of the Tchaikovsky Sleeping Beauty ballet! The quality is surprisingly good for the 70s, and the tempos are fast and exciting. Recommended! 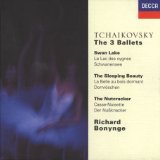 Click to explore the delightful music of other famous Russian composers, some of who's styles are similar to Tchaikovsky