Capriccio Espagnol is Nikolai Rimsky-Korsakov's sparkling orchestral painting of Spain. The piece's passionate tunes and brilliant colors made it a smash-hit concert favorite.

It's actually one of the most popular orchestral works around, which is surprising because it's relatively short (an average performance is about 15 minutes).

The Capriccio Espagnol began life in 1887.

Rimsky-Korakov was feeling a bit smug with himself this year. He was proud of his previous works, and decided that now he would write a glittering show-off piece for orchestra and violin.

He sketched this idea out, but didn't like it. So he adapted his plan. He kept the Spanish theme, and made the orchestral music so glittering and flashy that each and every musician would need to have virtuoso skills to play properly!

And glitter it did... 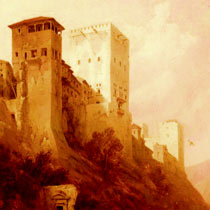 Rimsky-Korsakov's supreme mastery of the orchestra is a wonder.

Like the full-blooded, intoxicating Spanish melodies and locales they were inspired by, the suite is bursting with orchestral imagination and beauty.

The premiere was in St. Petersburg on October 31, 1887. Rimsky himself conducted it.

It was a massive success - the audience exploded with applause, and wanted the orchestra to play it again all the way through!

Even the musicians in the orchestra kept stopping to applaud Rimsky-Korsakov's genius during rehearsals!

Rimsky-Korsakov was actually slightly annoyed that all most people could see in the piece was the magical orchestration. He thought that the orchestration was a fundamental part of the piece, and not just a fancy facade.

Click to listen to and explore Scheherezade, another dazzling Rimsky-Korakov classic.

Let's have a look at the glorious music in the Capriccio. It's in five short movements...

The dance afterwards is a sultry gypsy melody.

The piece has a percussion section big enough to invade a fortress! Rimksy-Korsakov also jam-packed with enough new (at the time) orchestral effects to fill a book.

Click to read about other great Russian composers and their colorful music.

Since the main attraction of the Capriccio Espagnol is the orchestral fireworks, I think the best recordings of the piece are those that bring this to life.

The best one I'e heard is a re-mastered 1959 recording by Eugene Ormandy and the Philadelphia Orchestra. It manages to capture all the little details of orchestration which easily get lost in other recordings. My only complaint is that the tempi are a little slow for passionate gypsy music! 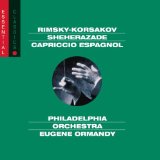 Another recording I life is from conductor Gerard Schwarz with the Seattle Symphony orchestra. This performance has a giddy, sort of elastic feel, with perfect tempi for the frenzied dances. The first movement is great!

One thing though, sometimes the first clarinetist loses some notes of the melody (the recording drowns them out somewhere?). Either way, this is an integral part of the piece, which doesn't come through as perfectly as it could. Still, I recommend this as a runner-up to the Ormany recording.

Here's a great video of the Berlin Philharmoniker conducted by Zubin Mehta, performing the entire suite! Note: this first clarinettist does the job very well indeed!