Rimsky-Korsakov's dazzling Scheherezade is an oriental fantasy bursting with color and excitement...

Based on the middle-eastern legend 1001 nights, Rimsky-Korsakov tells the stories through music, creating a fairy-tale tapestry of mystical adventures and romance.

The composer's trademark gift for beautiful, captivating orchestration is evident. The exotic melodies, sensations, and images Rimsky conjures up in this piece have made it his most popular work.

Let's have a little look at how Scheherezade came into existence...

The years 1887 and 1888 are intriguing parts of Rimsky-Korsakov's life.

In these two years he composed by far his 3 most popular pieces (Scheherazade, Capriccio Espagnol, and the Russian Easter Festival Overture). After these he stopped writing for orchestra and focused mainly on operas.

In 1887 Rimsky-Korsakov was inspired to create an orchestral work based on scenes from the book Arabian Nights, which would end up being one of his last pieces for orchestra.

Russian composers in the 19th century, and especially Rimsky-Korsakov, were fascinated by the oriental, and incorporated eastern exoticism into their music frequently.

He wrote it efficiently, and finished the piece without any hiccups by the middle of 1888.

The stories in the Arabian Nights were passed down orally for hundreds and hundreds of years. It wasn't until the 18th century that a European traveler compiled them into a book to be published.

The story is this...

Sultan Shahriyar's first wife betrayed him, and he was so grief-stricken that he vowed to marry a new wife each night and kill her by morning.

But she devised a plan to stop the Sultan's cruel murder-spree: she told him an enthralling new story each night, but stopped before the story ended. The Sultan would be so enraptured that he called off her execution until the next day.

This continued for 1001 nights. In the end the Sultan was convinced of his wife's loyalty and wisdom, and ended his wife-killing. 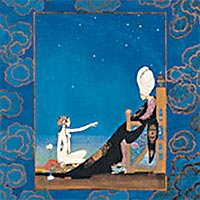 But the piece is definitely a Russian creation. The Eastern flavor has hues of Russian musical ideals, and the orchestra is a standard Romantic-era ensemble (despite the lavish impressions Rimsky wrings out of it), plus a few extra percussion gadgets.

The composer didn't actually aim for precise musical depictions of the stories in the book. His goal was much more of a general flight of fancy around the exotic legends, dipping in and out of them whilst reveling in a general sonic fantasy.

The listener should ideally be carried away into a far-flung fantasy land inspired by the narrative, not meticulously monitoring every detail of the story. As the composer put it, he wanted:

"a kaleidoscope of images and designs of oriental character".

There are titles to each of the 4 movements though. But first let's briefly look at the musical motifs and strands that bind the entire piece together...

First, we have the Sultan's theme. This is a slow, powerful melody, striking fear from the first note:


Here are the titles of the movements:


You might also be interested in Mussorgsky's Pictures at an Exhibition, another piece with similarly imaginative music illustrations

One popular recording of Scheherezade is by conductor Yuri Temirkanov with the NY Philharmonic. It's from the early 90s so the sound quality is high. The interpretation has atmosphere, and the solo passages are enchanting, but for me it lacks the magic that the piece could have.

Another recording is by conductor Eugene Ormandy, with the Philadelphia Orchestra. This one has a vast dynamic range, although the 1960s recording quality isn't excellent. Still, this version has expansive and soul-stirring emotions.

But my recommended recording is the 1961 interpretation by Ernest Ansermet with L'Orchestre de la Suisse Romande.

The orchestra injects such magic and exotic beauty into their playing. There's life in this recording - an explosion of color and fire which hurls you blinking into the heat of the Eastern sun. It blows your head open and pours earthy spices, gleaming jewels and rare artefacts in, mixing them into a rich stream of blazing sound.

The sheer range of expression and emotion the Ansermet gets out of his players is incredible - this is one of my favorite CDs in my entire collection. Highly recommended!