The Chopin preludes are popular short musical sketches, with a huge range of moods and feelings.

They're full of Chopin's characteristic melodies and emotions.

I love how simple and accessible they are. No complex musical structures to get your head around - just pure music, straight from Chopin's imagination!

Prelude to the Preludes... 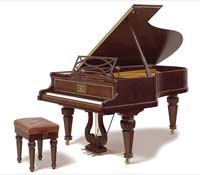 These were part of a pair, as introductions to the fugue which followed. This set the tradition for preludes to be short passages that went before something bigger, perhaps to set the mood.

But Chopin tried something new - he didn't put anything after his preludes. They stand alone.

This confused some people at first, but now the Chopin preludes are acknowledged as little masterpieces. As they should be!

The Chopin preludes are a set of 24 (very) short pieces (Op. 28). Chopin also wrote three other preludes: a short one and happy one in Ab Major, one in C# Minor a bit later on, and an uncompleted one called the "Devil's Trill Prelude".

He'd written most of them before he went on his crazily disastrous visit to Majorca with George Sand. Once he was there, he finished the preludes up.

They're tiny pieces - the longest is only 5 minutes (the well-known Raindrop prelude)!

About 8 or 9 of them are under one minute long. But each one manages to convey a very powerful emotion in that small space of time.

The Chopin preludes have a very improvised feel, as if they were sketches in music.

This is likely because of the way Chopin composed. He just made it up as he went along, trying out different things and writing down the good bits.

Some of the preludes sound so improvised that publishers sometimes leave out the bar lines on the sheet music (the lines that separate each unit of rhythm)!

This leaves the pieces looking like a continuous stream of music on the page.

Chopin wrote these preludes in all 24 Keys, from A Major to G Minor. He was a dedicated student of Bach, who did the same in the important Well-tempered Klavier (which standardized the western musical keys).

The order of the preludes is important too, since each one is related to the next one harmonically. The pattern goes: major, minor, major, minor, and so on. I think these links are so that they sound connected when you play them all together.

They vary in mood. After a sad or dramatic one, we get a calm or upbeat one. This is more evidence that they're best when played together, one after the other.

Apparently George Sand, Chopin's lover, gave each of the preludes a descriptive title. Unfortunately (or fortunately?) these have been lost over time.

A lot of other people have given them descriptive titles, but Chopin never approved any. He didn't like adding titles to his works, and used to tell off his publishers if they did!

The British composer Herman Finck thought that "If tears could be heard, they would sound like these preludes." I definitely agree with this quote - you only have to listen to the No. 4 prelude to hear sadness in sound.

Click to listen to and explore Chopin's nocturnes, which feature similarly complex and beautiful music.

These are the most well-known Chopin preludes. You may have heard some of them before!

Here's a list of the Op. 28 preludes. I've added the descriptive names which Hans von-Buelow gave them. They're not really "official" since Chopin himself never approved any, but I think they help to describe the pieces.

Here are four videos of the pianist Maurizio Pollini playing all 24 of the Op. 28 preludes. You can see the number of each prelude when he begins it on the bottom of the video. Grab a drink and enjoy!

Click to read about Maurizio Pollini, one of the most talented and popular pianists of the past few decades.


Other music by Chopin:

Also have a look at Chopin's tumultuous life in this biography.