Franz Liszt's 19 Hungarian Rhapsodies use gypsy tunes from his native Hungary, and combine them with his own dazzling piano writing. The colorful and flamboyant pieces which result tax pianists as much as delight listeners!

They're some of the composer's most amazing and popular pieces (especially the No. 2).

For me, the pieces evoke images of stormy and passionate Hungarian gypsies, traveling slowly through romantic Eastern European countryside.

Liszt was really proud of being Hungarian. But he was a little guilty that he couldn't speak the language very well and didn't live there.

I think he wrote the Rhapsodies to try to promote Hungarian music and nationalism. He did a good job!

Liszt uses the gypsy scale heavily in the Rhapsodies, which is a series of notes that have a really exotic and Hungarian flavor.

Liszt published the first set of the Rhapsodies in 1853. He then added four more towards the last years of his life, and made alterations to some of the earlier ones. I actually prefer a few of the older versions, but you can't argue with the composer himself!

Liszt uses the piano to imitate the sounds in a gypsy band.

One important element of these groups is the the accompaniment, which is played on a cimbalon (a box with strings which the player hits with small hammers). I've heard one of these played live, and I have to say Liszt does an excellent job of reproducing the effect on the piano!

Because they're Liszt pieces, they have astoundingly difficult passages, and loads of cadenzas (basically flashy show-off parts).

They also have all sorts of crazy tricks, like three-hand illusions, where Liszt writes the music in such a way that it sounds like the pianist is playing with 3 hands!

Here's an example of a three-hand illusion, from the Hungarian Rhapsody No. 9:

When they're played by an extremely skilled pianist, they're really really fun to listen to. Here's one of my favorite melodies, for example:

Liszt also used that melody in his lavish Hungarian Fantasia, a huge piece for piano and orchestra.

Famous composer Johannes Brahms was also inspired by Hungarian music, and created another popular set of pieces based on those dizzying rhythms and exotic melodies: the Hungarian Dances.

Hungarian Rhapsody no. 2 in C-sharp Minor

The Hungarian Rhapsody No. 2 in C-sharp Minor is by far the most famous of the lot. It's been used countless times in movies and cartoons, and the main theme from the fast section is so well-known most people recognize the melody but not the composer!

This is the first of the set I heard, and it became one of my favorite pieces after I listened to it a few more times.

I even tried to play some of the melodies from it on the piano, but struggled a bit with some of the jumps in the left hand. It was probably (OK, definitely...) a few notches above my skill level at the time!

The piece is really accessible for non-musicians, since the structure is quite simple. It's basically a slow section, then a fast section.

That's it! It also helps that it has some extremely appealing melodies, and some amazing piano tricks for pianists to show off with.

Here is my absolute favorite performance of this piece, by the famous pianist Alfred Brendel. 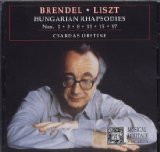 He manages to capture the powerful and mature feeling of the slow section, and also keep rhythm incredibly well in the fast part (which is something I think a lot of pianists get wrong). Listen to the way he controls the melody at 6:40 in this video to get an idea of what I mean.

One of my favorite Rhapsodies is No. 5 in E Minor. I love the romantic power of the last segment - it always moves me. I think it's some of Liszt's most inspiring music.

I also really like No. 8 in F-sharp Minor. It has everything that makes a Hungarian Rhapsody: a passionate, free-flowing slow segment, fantastic and brilliant piano acrobatics, and a blazingly fast finale with lively melodies.

The Hungarian Rhapsodies are popular for their powerful melodies and virtuoso fireworks. The pieces are a perfect example of Liszt's superb piano composition skills, and his love for his native country. The question now is: which one is your favorite??


Also have a look at Liszt's Sonata in B Minor, and the Mephisto Waltzes.