Liszt's Sonata in B Minor
A Powerful Masterpiece

The Liszt Sonata in B Minor. The name causes pianists to tremble, perhaps even fall off their piano benches. Liszt's powerful masterpiece is difficult to understand, and even more devilishly difficult to play.

The roughly 30 minute piece is one of Franz Liszt's greatest achievements. For me, it really sums up Liszt as a composer: forceful, unforgiving storms of sound, wild cadenzas (a.k.a. fast, tricky parts where the pianist shows off), and soul-stirring melodies.

History of the Sonata 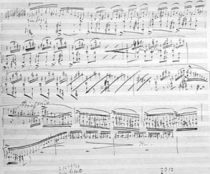 Liszt finished his Sonata in B minor in early 1853, when he was living a comfortable life in Weimar. He wrote most of his large-scale, more thoughtful music here, away from the spectacular European tours and aristocratic salons.

His new tranquil town life allowed him to focus on writing more sophisticated music than the showpieces he used to play.

The Sonata in B Minor challenged the traditional 19th-century sonata form (a widely-used musical template consisting of three sections).

Critics made fun of it when it was published and performed, as they usually do. Other musical visionaries, such as Richard Wagner, heard it and loved it. How could they not!

Nobody's sure whether or not Liszt wanted the piece to be though of as programmatic (i.e. if it was inspired by something non-musical and tries to reflect this). Liszt didn't suggest this at all though. Personally I think the piece was meant to be pure music, without any outside influences.

The Sonata in B Minor is put together in an elaborate and confusing way.

Musicians and scholars have ripped it apart trying to understand how it was put together, but they've become very confused about the whole thing. Each one has their own opinion of how to slice up the piece.

It's definitely built using a small number of different melodies. Some say there are 5, others 7 (personally I can only count 5). Each passage is only a few seconds long.

Liszt gets very clever, and repeatedly changes the mood and style of these little motifs. By adding all of these changes together, he constructs the entire piece. Amazingly, only one tiny section of the Liszt Sonata in B Minor is repeated exactly!

Here's an example of how a little melody is transformed several times throughout the piece...

However, people can't agree whether the piece is made up of one long section, or three sections, or even four sections. And even those who agree on the number of sections still argue about where exactly the sections begin and end!! Oh dear...

In my opinion, the Sonata divides nicely into three sections, which is also the way it is separated on a lot of CDs and recordings.

But all this worrying about how the piece is structured, even though it's interesting, can sometimes just take away from the amazing experience of listening to it. That brings me to...

Because the Liszt Sonata in B Minor is such a long and complicated piece, pianists can interpret it in a lot of different ways. This means that all the different recordings are really varied!

My personal favorite performance of this piece is by Jorge Bolet. I think his heavy playing style suits the epic nature of the piece.

He was in his 60's when he recorded the version I like (from the Liszt: Piano Works boxset on Decca), which gives his interpretation a very mature feeling. 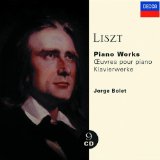 Another recording I like is by Claudio Arrau. This performance is more colorful and fluid than the Jorge Bolet recording. I think Arrau manages to wring a large range of emotions out of the piece, which makes for a very moving listening experience. 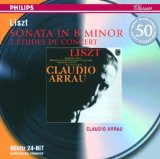 I'd recommend you get either recording, they're both great.

The Liszt Sonata in B Minor is breathtakingly sublime. It challenges pianists, listeners, and musicologists, but despite this (or maybe because of this?) I see it as one of the greatest pieces of piano music ever written. A true masterpiece!


Also have a look at the Dante Symphony and Liszt's Hungarian Rhapsodies.