The 'Pastoral Symphony' (Beethoven's 6th symphony) is a charming masterpiece, which both paints a picture of nature and describes man's feelings towards it.

Beethoven loved the natural world, and was inspired to write this symphony by his regular walks in the countryside around Vienna.

The pastoral (rural) theme in music had been going on for centuries before Beethoven. There had been lots of pieces describing shepherds, storms, the singing of birds, and other boringly quaint little scenes.

But the Pastoral symphony doesn't just tell a story. Beethoven was the first to express, alongside the images of nature and smiling peasants, the mixture of feelings people have when they go to the countryside.

"Recollection of Country Life" he wrote on the title page, and below that, "more an expression of feeling than a painting". However, the symphony does in fact contain a fair amount of images of nature as well...

Beethoven began sketching out his symphony number 6 in 1802, and finished it in 1808.

The premiere was probably the grandest musical event in Beethoven's life. It was a massive concert, packed with four and a half hours of brand new Beethoven music! Apart from the Pastoral, there was also the Fifth symphony and a new piano concerto. What a lucky audience!!

But it wasn't exactly a great concert. The audience was bored - it was almost a case of too much of a good thing. The auditorium was also freezing, and the orchestra played rather badly from not having time to rehearse.

So the Pastoral symphony didn't really have a great start. But not to worry! It soon became a popular favorite, and still is these days. 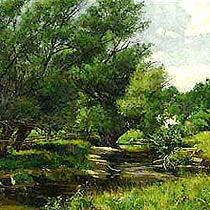 Beethovens 6th Symphony is packed with rustic sounds, simple folk tunes, lots of repetition (instead of development), and a feeling of calm beauty.

But the music also contains an emotional aspect, which reflects mankind's feelings towards the natural world.

Beethoven spread the symphony out into five movements, and gave each movement a little subtitle explaining what it was about.

There are ridiculous amounts of performances of the pastoral symphony, since there is of course one in every interpretation of the 9 Beethoven symphonies.

A good place to start is the recording by George Solti, conducting the Chicago Symphony Orchestra. It was recorded in the late 80s, and has a big and spacious sound. Solti lets the music breath freely, basically speak for itself. Available on Decca.

But the huge favorite recording of the Pastoral symphony is from 1958. Leading is conductor Bruno Walter, who actually had as his orchestra a random jumble of freelance musicians. But did it ever work!

For decades this has been held up as the recording of the 6th. It's simply as close to musical perfection as can be achieved. It suffers slightly from old recording technology, but the interpretation still shines through. Available on Sony. 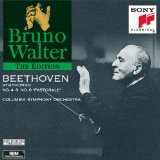