Tchaikovsky's Romeo and Juliet Overture is a magical fantasy piece, based on Shakespeare's famous tragedy.

It was ignored and criticized at first, despite the original idea coming from the Father of Russian music, Balakirev. Tchaikovksy revised it over and over again, innovating and polishing. It's now one of the composer's best-loved works.

The piece's famous love theme has sunk into the world's consciousness. It's one of the most recognisable melodies in the world:

Let's have a look at how the piece came about... 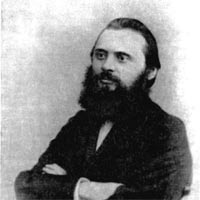 The Romeo and Juliet Overture's story starts in 1869. Tchaikovsky was 28, a budding composer and professor of composition in Moscow.

He had a small collection of pieces to his name, but nothing explosively huge enough to forge his name in fame (yet!).

He had just met the group of Russian composers known as The Five. The nationalist group had strong ideals about what Russian music should be like, and weren't too impressed with Tchaikovksy's music.

The head of The Five was Mily Balakirev, an unsuccessful composer but a wonderful musical visionary. He had just conducted Tchaikovsky latest piece (Fatum), which was a big failure with critics and audiences.

Balakirev told Tchaikovsky exactly why - then suggested a new composition, designed to be a hit.

This new idea was to be based on the immortal Shakespeare play Romeo and Juliet. Balakirev gave Tchaikovsky a detailed blueprint of how the piece should be laid out.

Tchaikovsky wasn't entirely comfortable with Balakirev's views and opinions on music, even though he respected the elder composer. But the young composer agreed to give the Romeo and Juliet idea a shot. 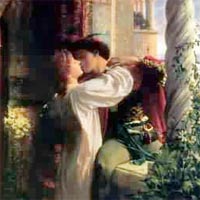 He whipped up an overture according to Balakirev's outline and sent it to him. Balakirev was fond of the love theme, but not impressed with the rest. He bluntly suggested a fair amount of changes, and criticized elements of Tchaikovksy's work.

The audience was much more interested in the conductor, Nikolai Rubinstein, who had been to court the day before and found guilty of a minor scandal. They cheered for him and completely ignored Tchaikovsky's new piece!

Since the piece failed the first time, Tchaikovksy reasoned that Balakirev's criticisms might probably have some basis. The younger composer reworked the introduction and changed the structure of the piece, making it less academic and more innovative.

The Romeo and Juliet Overture was performed in Feburary 1872, but audiences at the time weren't ready for it and the piece never took off.

It wasn't until 1880 that Tchaikovsky gave the Romeo and Juliet overture a new ending and slapped the subtitle "Overture-Fantasia" onto it. The new version premiered in 1886, and has been fantastically popular and famous ever since!

What makes this piece so special?

Tchaikovsky manages to capture the tensions and dramas of the play in a unique, novel way: by turning it into a symphonic poem.

What makes this piece interesting is that Tchaikovsky doesn't just translate Shakespeare's play into a linear musical story. The composer takes ideas and themes from the plot and illustrates them in brilliant colors.

The main three are...


The piece opens with the Friar Lawrence theme, which descends into the street battle between the Montagus and Capulets.

Cutting through the rivers of blood come quiet chords, blossoming into the love theme. This signifies the first sighting and eventual consummation of Romeo and Juliet's love.

We hear the battle sounds stirring, followed by cymbal crashes depicting the main characters' suicide. The epilogue has a sorrowful, altered version of the glorious love theme, which is followed by a funeral dirge over soft drums.

Finally, the love theme returns in full bloom, and the piece ends with a note of hope. The looooooong ending chord conjures up the intertwined notions of finality and fate.

Click to explore another ultra-famous Tchaikovsky piece, the explosive 1812 Overture!

The are mountains of different recordings of the Romeo and Juliet overture, each worthy enough to consider. For the purpose of economy though I'm only going to look at the ones that achieve renowned appreciation, showing they can stand the test of time...

Daniel Barenboim's recording with the Chicago Symphony is a virtuosic performance with a clean sound, but the moderately raw recording quality relegate this to the second tier.

Leonard Bernstein with the New York Philharmonic has recorded a sincere performance of the piece, played from the heart. It has no unique interpretative qualities, but a solid, shining rendition. The CD gets bonus points because the it features a good selection of Tchaikovksy's other symphonic poems.

The standout winner for me is the beautiful performance by Valery Gergiev, conducting the St.Petersburg Kirov Orchestra.

This recording is full of Russian soul, with a strong attention to the smallest score details. Gergiev captures the deeper emotions of the piece in the excellent interpretation of the finale. Intense, and highly recommended. The recording also features the powerful Tchaikovsky Symphony 6.