The first Tchaikovsky Piano Concerto is world-famous, but the composer also wrote two other exciting concertos...

All three of the Tchaikovsky piano concertos have colorful and explosive orchestration. There's also a very Russian flavor, which is likely because of the folk tunes the composer used. 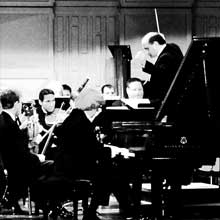 Tchaikovsky composed his first piano concerto between November 1874 and February 1875.

He performed the piece for Nikolai Rubinstein (a famous piano player of the day) soon after it was finished. Tchaikovksy's hope was that Rubinstein would like it and perform the premiere, which would make the piece more well-known.

However, Rubinstein attacked the piece, calling it "worthless and unplayable". He asked Tchaikovsky to rewrite large parts of the concerto, but the composer refused. What was Rubinstein thinking??

Because of this disagreement, Tchaikovsky asked the German pianist Hans von Bulow to perform the premiere. Von Bulow was giving a tour in America at the time, so the first performance was in Boston on October 25, 1875. The concerto was a massive success here!

The First Piano Concerto is one of Tchaikvosky's best known works. The opening melody is catchy and very memorable. The composer based it on a melody he heard a blind beggar sing at a market in Ukraine.

Even though this melody is very enjoyable to listen to, Tchaikovsky teases us by only playing it twice in the entire concerto, and both within the first few minutes! He doesn't return to it at all. Perhaps a tactic to get repeat concert visits?

The second movement - the slow movement in a piano concerto - is soft and charming. It's about a third of the length of the giant first movement, but I think its quaint and upbeat nature is a perfect balance to the first movement. Definitely "short and sweet"!

The third movement (the Finale) is the most energetic section, full of fast piano tricks. It's also short, but it has a tricky double octave passage (both hands playing the same note in 4 different places on the keyboard) near the end. Here's a video of the pianist Martha Argerich performing the octaves:

This was Tchaikovsky's own favorite of his piano works. 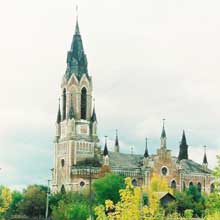 Tchaikovsky wrote his 2nd Piano Concerto while he was staying with his sister in Kamenka (a town in Russia) in October 1879.

The idea was to go for a holiday and do nothing, but he got bored and started composing again. He worked very slowly and deliberately, and by May 1880 the final orchestrated score was complete.

Nikolai Rubinstein begged Tchaikovsky to let him perform the premiere as a way of making up for his negative opinion of the first concerto. Good to know he saw the error of his ways!

Tchaikovsky agreed, but unfortunately Rubinstein died 8 months before the premiere. This was in New York, on 12 November 1881.

Tchaikovsky's 2nd piano concerto is in 3 movements, like the first concerto. I find the 2nd movement (the slow movement) a bit strange, because a solo violin and cello seem to feature much more prominently than the piano. In fact it sounds almost like a concerto for piano trio (i.e. piano, cello, and violin) rather than piano solo!

The other unusual thing in this concerto is the lack of trombones and tuba, which Tchaikovsky usually included in his orchestral pieces. This gives the entire orchestra a softer sound, with more emphasis on the string section.

Nonetheless, I find the second movement extremely touching. It seems to capture the feeling of unrequited love. It also has a nostalgic melancholy which for me conjures up images of a kind of aching golden-red color.

The Tchaikovsky Piano Concerto No. 2 was never as popular as his first piano concerto. This upset the composer. He enjoyed working on the piece and thought it was one of his best compositions.

I think I can understand why it was never as popular as the 1st Piano Concerto. It lacks the epic nature of the 1st, and the first and third movements sound a bit like drunken folk melodies (to me at least!). But I love the 2nd movement because of its tender sadness.

On to the last piano concerto...

This is a quirky piece, partly because Tchaikovksy never finished it!

It started life as a Symphony in E-Flat Major. But Tchaikosky gave this up to write a Piano Concerto for his friend Louis Diemer, a French pianist. Tchaikovsky reworked the material from the first movement of the old Symphony into his new Concerto.

But this piano concerto seemed to be growing too long! So Tchaikovsky cut out 2 entire movements, leaving the piece as a single movement work for piano and orchestra.

This is slightly different from a piano concerto, which has 3 movements. The piece is still called a "piano concerto" though, despite only having one movement. Don't ask me why!

Tchaikovsky wrote "end of movement 1" at the end of the finished manuscript, so he might have wanted to write a full three movement Concerto. We'll never know though...

Tchaikovsky got his friend Sergey Taneyev, a former student, to help him write the piano part. However, Taneyev thought the soloists job wasn't difficult and flashy enough! Tchaikovksy threatened to destroy the manuscript because of his friend's disapproval, but never did.

Tchaikovsky died in November 1893, a little over a year before the premiere of the 3rd Piano Concerto in Saint Petersburg on January 7th 1885. It's a shame that he never heard it performed in the way he had imagined.

The piece reminds me a bit of the third movement of the first piano concerto, but with a maturer sound and structure. It has a really fun melody a few minutes in, which is one of my favorite parts of the piece.

The 3rd Tchaikovsky piano concerto also has a very long cadenza (a hard part for soloists to show off) right in the middle. It has endless runs all over the keyboard below a repeated melodic idea. When I used to play piano it seemed like an impossible passage! Here's an excerpt:

My favorite recording of Tchaikovsky's piano concertos is by Mikhail Pletnev. I think he has a rich and romantic way of playing, which suits Tchaikovsky's excellently. The recording is from 1998, and on the EMI label, with the Philharmonia Orchestra of London conducted by Vladimir Fedoseyev. 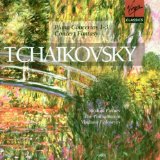 I can also recommend the recording of the first concerto by Herbert von Karajan and pianist Evgeny Kissin, with the Berlin Philharmonic Orchestra. Kissin plays like a true virtouso, full of magnificence and flair. It's also Karajan's last appearance with the BPO, showcasing his mature wisdom and skill.

The recording, from 1988 is on Sony Classics.

Another wonderful, and very famous, recording is by American pianist Van Cliburn.

In the 1950s, in the depths of the cold war, Van Cliburn won the Tchaikovsky Competition in Russia, playing Russian piano concertos. He has the massive sound required for the piece, as well as capturing all the little details of rhythm and color. Wonderful! 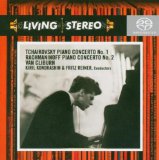 You might also be interested in Tchaikovksy's violin concerto, a dizzying whirlwind of virtuosic fun. The composer didn't even play the violin, yet managed to create one of the greatest violin concertos of all time!