Here is a short Tchaikovsky biography. I've tried to include some interesting anecdotes that illustrate the composer as a person, as well as a timeline of the most important events in his life and most popular pieces.

Peter Ilyich Tchaikovsky was born in 1840 in Votkinsk, a tiny town 1000 miles east of St Petersburg. There was no history of musicians in his family, except for a handful of amateur players.

The young Tchaikovsky was bright - he could read and write French and German fluently by the time he was six years old!

He formed a very close bond with his French governess, Fanny Durbach. Those early years with his family in a small rural town were some of the happiest in his life.

Even at a young age, he was extremely sensitive to criticism. He also suffered from all kinds of illnesses. Once he had to take six months off school because of a sickness.

His illnesses, anxiety, and sensitivity were problems which would sadly affect him on and off for the rest of his life.

His father, noticing his son's enthusiasm for music, got him good teachers, and an orchestrion (a kind of music box that imitates elaborate orchestral sounds). Tchaikovsky fell in love with Mozart (click for biography)'s music by listening to the orchestrion. The fascinating music box was probably Tchaikovky's first musical mentor!

His father didn't want his son having a career as a musician, however, since it wasn't quite proper. So he sent Peter Ilich to train as a civil servant in the School of Jurisprudence.

On his first day of school, his mother dropped the terrified young Tchaikovsky off. He screamed and ran after her carriage as it drove away, but he couldn't catch it. He didn't see her again for two years. The event deeply marked the young boy, and altered his character towards the melancholy man he was in later life.

His mother died of cholera in 1854. Tchaikovsky was wretched and devastated. He was moved to write down one of his pieces for the first time (before, he just improvised) as a touching eulogy for his dead mother.

He graduated school, and entered the Ministry of Justice in 1959. But he resigned from the drudgery four years later, to start a musical career.

It was just as well: he found the work tedious and dull. Later, when someone asked him what he had actually done there, Tchaikovsky said he couldn't even remember!

Pyotr Ilyich started studying at the St Petersburg conservatory, where he had two main teachers: Nikolai Zaremba, and Anton Rubinstein.

Rubinstein was quite conservative, and got really angry at one of Tchaikovsky's homework exercises (the symphonic poem The Storm). It had a relatively modern sound and structure, which the grumbling teacher didn't like the look of.

His classes went well, and he made good friends around Moscow. One of his pieces (Overture in F) was even very warmly received at conservatory concert - he got a standing ovation!

Over the years he gradually settled into a comfortable life in Moscow, and his fame and popularity grew steadily. This leads me on to the next part of this Tchaikovsky biography... 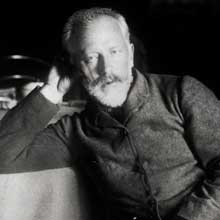 In 1870, Tchaikovsky's Romeo and Juliet was premiered. This was the beginning of Tchaikovksy's wider fame. The piece was characteristically "Tchaikovsky", and got the composer's name known in in places as far away as New York and London.

He stayed at the Moscow Conservatory for 12 years in total, composing a good number of pieces.

Click to listen to and explore the Romeo and Juliet Overture, which has probably the most famous "love" melody in music!

He also became a music critic to earn more money. Some of his reviews have quite creatively scathing remarks!

Prince Odoevsky, a generous patron, once gave Tchaikovsky a pair of fine cymbals, since he thought that the composer was "good at introducing them at the right moment" in a piece. What an interesting gift!

He married one of his former students at one point, out of a feeling of obligation. But Tchaikovsky, famously, was actually homosexual. The marriage completely failed after a few months, with Tchaikovsky unable to return his wife's affection.

He was severely distraught, and tried to drown himself in an icy river.

In 1877, he began a strange relationship with Nadezhda von Meck, the widow of a rich railway magnate. She was a big fan of his, and supported him financially. They communicated entirely through sending letters to each other though, and only met once (where they were too embarrassed to say anything to each other).

Von Meck was a dear friend, and Tchaikovsky was extremely upset when she suddenly stopped sending letters and money in 1891.

So, with his new freedom, Tchaikovsky finally resigned from the Moscow Conservatory in 1878 and traveled around Europe and Russia. He lived alone, in rural areas, and moved frequently. He was almost like a social exile.

His isolated lifestyle suited him very well. He could think and compose in tranquility, and didn't have to be around irritating distractions like traffic and other people.

The Tsar eventually gave Tchaikovsky a life pension and the Order of St. Vladimir, and personally requested a performance of the composer's opera Eugene Onegin. At this point, Tchaikovsky became extremely popular with the public.

He now started to feel more comfortable in society. In 1885 he stopped traveling and went back to live in Russia, in a manor house between Moscow and St Petersburg.

He became a celebrity in Russia, and promoted Russian music. All his life he was enthusiastically proud of being Russian. He hated it when anyone suggested that he might have Polish ancestors.

Once, as a boy, he was looking at a map of Europe. Suddenly, he covered Russia with kisses, and then spat on all the other countries!

He also received some influential musical positions at this late stage of life, such as director of the Moscow branch of the Russian Musical Society.

Once, when he held this position, a percussionist wasn't playing very well during a rehearsal of Rimsky-Korsakov's Capriccio Espagnol (conducted by the composer). So Tchaikovsky himself offered to play the castanets!

Click to listen to and explore the dazzling Capriccio Espagnol, a musical picture of Spain

I would have liked to have seen that performance. It wasn't to be, however, as the orchestra was suddenly shocked into obedience by Tchaikovsky's suggestion.

In 1889, he toured around Germany and Switzerland as a conductor. On this trip he met the composers Johannes Brahms and Edvard Grieg. He didn't like Brahms's music, but thought that Grieg's was superb.

Peter Ilich Tchaikovsky died of cholera on November 6, 1893, a few days after drinking unboiled water. His powerful 6th Symphony had its premiere only 10 days earlier.

The Tsar paid for his funeral personally.

1840: Born in Votkinsk
1849: Family moves to St Petersburg
1852: Enters into the School of Jurisprudence
1854: Mother dies
1859: Becomes first-class clerk in the Ministry of Justice
1863: Resigns from the ministry of justice, starts at St Petersburg conservatory
1866: Graduates from the conservatory with a silver medal, moves to Moscow and becomes music professor
1867: Two movements from First Symphony premiered in February
1870: Premiere of Romeo and Juliet
1873: Premiere of Second Symphony, with great success (an ovation after every movement, and a laurel wreath at the end)
1874: Premiere of the opera The Oprichnik, a massive success (Tchaikovsky hated the piece though)
1875: Premiere of First Piano Concerto
1876: Premiere of Swan Lake
1877: Begins correspondence relationship with Nadezhda von Meck
1878: Quits teaching and begins travelling
1884: Awarded Order of St Vladimir by the Tsar
1885: Resettles in Russia
1886: Manfred symphony premiered successfully
1889: Tours Switzerland and Germany conducting
1891: Premiere of the Nutcracker ballet
1893: Awarded an honorary Doctor of Music degree from Cambridge University
1893: 6th Symphony premiered
1893: Death, 6th November 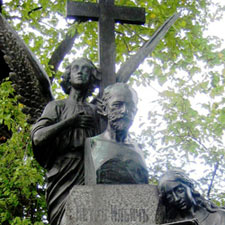 Why not explore Tchaikovsky's famous music now that you've read about the great composer's life?